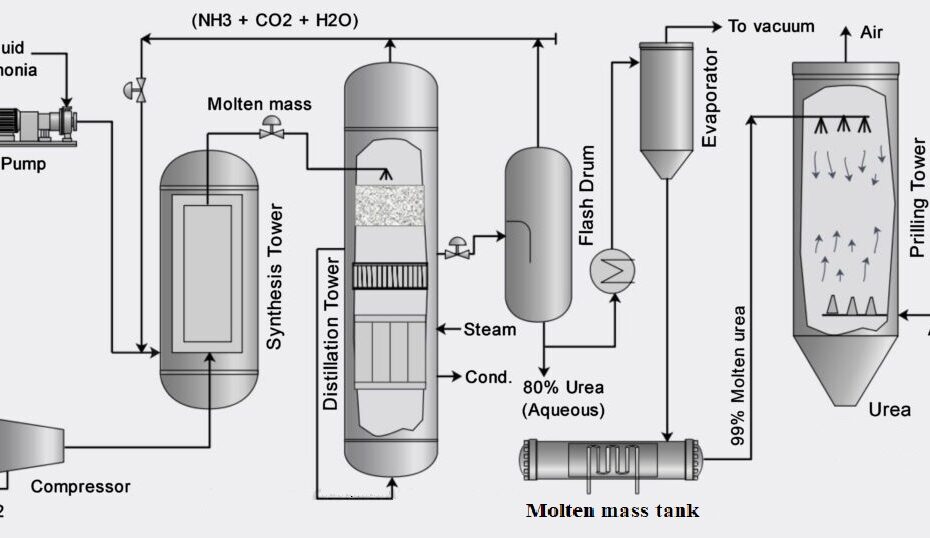 Urea popularly known as Carbamide is an organic chemical compound. Mostly it is manufactured to be stored as a solid, commonly in shape and form of pills and granules. They are highly soluble in water; hence it is easier to form their solutions at varying concentration. It can also be stored in solution after preparation of required. The nitrogen content is high.

Naturally, urea is produced in the human body and disposed of by the kidney as a natural cyclic process during excretion. In history was a significant chemical compound because it was the first organic chemical which is naturally found in the human body to be synthesized using inorganic chemicals in a laboratory by Friedrich Wöhler.  Because of this accomplishment, some people refer to Friedrich as the father of organic chemistry.

Urea is used in industries such as Plastic, Textile, Coatings, Adhesive industries. The most popular and common use of urea is fertilizer productions; this is not because of it high nitrogen contents(46%), urea readily dissolves in water and leaves no salt residues on crops and in soil. It is also used for foliar feeding. The main disadvantage of using urea as a fertilizer is its biuret component which forms during the urea manufacturing. Biuret becomes harmful to plant if its concentration exceeds 2% particularly germinating seeds and also is poisonous to animals. Controlling the concentration by optimizing equipment design and the temperature is a major industrial problem in urea manufacturing which demands continuous research.

The chemical reactions involved in the process:

The reaction of Ammonia and Carbon Dioxide to form Ammonium Carbamate.

Decomposition of Ammonium Carbonate to form Urea and Water.

Note: both reaction equations above are reversible.

The product from the first reaction flow into a decomposer where the second reaction occurs, and it is an endothermic reaction. It requires a certain energy to begin. Biuret is also formed as a result of decomposition of ammonium carbamate if temperature rise is excessive.

The conversion of the reactants to urea can be increased by increasing the amount of carbon dioxide, if carbon dioxide is present in excess then the conversion can be as high as 85% per pass but optimizing for the proper temperature, pressure and design is a challenge in itself hence usually per pass conversion are kept around 50%. The unreacted materials are recycled, resulting in overall conversion of over 99%. This minimizes the effects on the environment.

The major impurity in urea is water and also unreacted ammonia, carbon dioxide and ammonium carbamate. These are removed using distillation tower and evaporator. The essential condition is to keep the temperature high and pressure low during stages of separation. At these conditions, the ammonium carbamate will be decomposed back to ammonia and carbon dioxide also some carbon dioxide and ammonia will flash off. The primary process which happens in the evaporator is that of concentration. During concentration, optimum temperature should be maintained so that the urea remains in molten state and crystals are not formed inside the evaporator.

34 thoughts on “THE UREA MANUFACTURING PROCESS”